The University of Louisiana at Lafayette is steering a $14 million, three-year research initiative to develop oyster

The University of Louisiana at Lafayette’s Dr.

Construction is now underway near Eraste Landry Road for what will be one of the largest solar energy projects in the state.

A sprawling six acres of the University of Louisiana at Lafayette’s Research Park — home to institutes like the USGS Wetland and Aquatic Research Center and the Center for Visual and Decision Informatics — will now accommodate the Photovoltaic Applied Research and Testing Laboratory.

“We’re trying to push the boundaries a little bit in terms of alternative energy,” said Dr. Terrence Chambers, an associate professor of mechanical engineering who is leading the project. “Part of our purpose as a university is to clear the way so that others can — and will — follow.”

The facility, which has an expected completion date in early March, falls under the Energy Institute of Louisiana, the University’s research unit for all matters regarding energy development, usage, policy and its impact on the ecological and human condition. 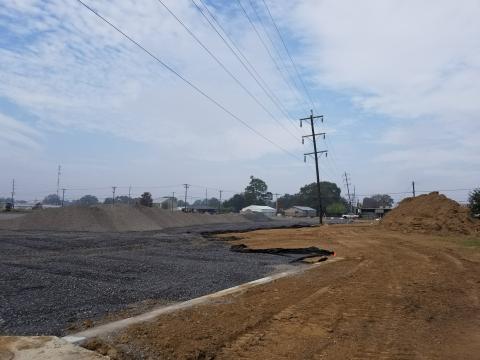 The PART Lab will be used to study the market’s newest alternative energy products and to provide a training ground for students.

In addition, it will reduce the University’s energy consumption by up to 10 percent, making UL Lafayette one of the only universities in the country to utilize its solar energy research lab to offset its fossil-fueled energy consumption. The energy being collected and stored by the PART Lab will be used to power the majority of the University’s sports complex, which consumes about 1.2 megawatts of energy. The lab will be a 1.1 megawatt system.

Unlike the Louisiana Solar Technology Applied Research and Testing Laboratory in Crowley, which uses 30-foot-tall parabolic troughs — curved solar panels — to absorb sunlight and convert it into energy, this new lab will use a photovoltaic system.

Most often seen on rooftops, photovoltaic panels are dark, flat squares made up by a collection of solar cells that capture sunlight. The energy is converted directly into electricity after passing through the positive-and-negatively charged material that make up the panels.

Solar will become the cheapest source to produce power in many countries over the next 15 years, according to a report from Bloomberg New Energy Finance.

“There are all kinds of questions in terms of renewable energy and integrating it into our power grid,” Chambers said, “and we are looking at how to do that in the best way for Louisiana.”

In 2016, the University and NRG Renew, LLC, signed the $5 million agreement to build the lab. Four million dollars of the arrangement is a research grant that will go towards the lab’s construction, and the remainder $1 million is a donation to the UL Lafayette Foundation that will be used for operation and maintenance over the next 25 years.