The National Academies of Sciences, Engineering, and Medicine has tapped the University of Louisiana at Lafayette’s

Last year, more than 67 inches of rain poured down on Lafayette — one day receiving as much as seven inches alone —, according to the National Weather Service’s measurements at the Lafayette Regional Airport.

Storm water runoff has become one of the leading issues within the city and its surrounding areas. After the historic “1000-year” flooding in August 2016 left properties and popular roadways under feet of water, local officials were scrambling to find a solution to the ongoing problem.

“The area has seen a lot of recent activity from flooding, so we began looking into how to educate the public on rain gardens,” said Dr. Taylor Sloey, a research scientist with the University of Louisiana at Lafayette’s Institute for Coastal and Water Research. 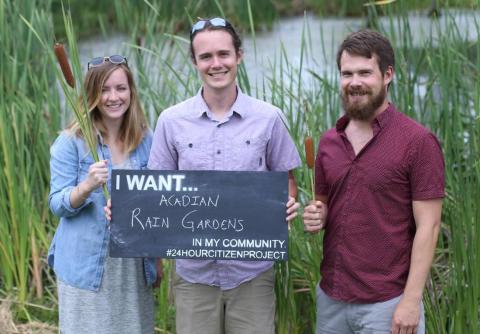 Rain gardens are affordable solutions for property owners who want to help reduce the amount of water they see settling over their lands, Sloey said. These shallow depressions in the landscape reduce water runoff by collecting it where it can soak in, and the deep roots of the plants growing there absorb pollutants and help prevent soil erosion.

A group made up by Sloey; Erik Yando and Scott Jones, both environmental and evolutionary biology doctoral students; and Oliver John, a landscape architecture graduate student, began researching which plants would be able to handle the excess water and other climate-related issues. John then created preliminary renderings of the gardens’ designs.

The group had initially presented their research at Civicside, a local crowdsourcing opportunity that requires a “Shark Tank”-like presentation in front of investors, which lead to a $2,500 grant and an agreement with Lafayette Consolidated Government to place rain gardens in two locations: Girard Park and City Hall.

A few community partners have also offered to contribute to the project.

UL Lafayette’s Office of Sustainability has committed to providing free mulch for both gardens, as well as designating the sites as surface learning projects. Students will learn about the variety of plants, while also maintaining the space.

UL Lafayette already has two of these sites in place. One, located between Madison Hall and James R. Oliver Hall, is a more traditional rain garden. The other, running alongside V. L. Wharton Hall, features plants dispersed among a rock bed.

The Louisiana Department of Environmental Quality, City Hall, Lafayette Parks and Recreation, and the Acadiana Plant Project have all also contributed to the sites.

Most of the plants the group chose are wetland plants native to the area, like dwarf palmettos, butterfly milkweed, and Louisiana irises. 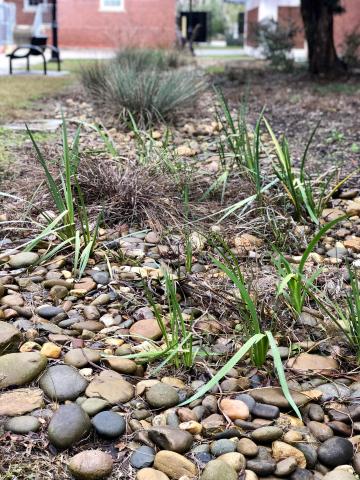 “We wanted to show that you don’t have to spend money going to Home Depot to buy plants,” Jones explained. “(These native plants) can take the heat. They can take flooding. They have long root systems to hold the soil in place.

“At the same time, we also wanted (the plants) to be beautiful because we wanted the gardens to be aesthetically pleasing, to improve not just the water management but what the sites look like,” he added.

One big misconception about rain gardens, according to the researchers, is that they are breeding grounds for mosquitos — another nuisance to the area.

“Mosquitos need several days to go from larva to adult, but the water isn’t standing for long,” Sloey said. “It could potentially also bring in other wildlife, like dragonflies or mosquito hawks, that will keep the mosquitos’ numbers down.

“If anything, you won’t be making the mosquitos worse,” Yando added.

Part of the project also includes signs at both sites that will educate the public on how to construct their own gardens. The cost of creating a rain garden? It could be as affordable as putting in a new flower bed.

The researchers said they hope to eventually create an app that allows individuals to identify their own rain gardens on an interactive map to promote awareness.

“It’s just an excellent thing overall because there’s a greater citywide interest in storm water management through the use of rain gardens,” Sloey stated, “and that’s one thing we’re trying to accomplish is just creating an educational platform for the public on the issue.”